HomeBlogFrom the Streets To Songwriting

From the Streets To Songwriting

Meet Jose, 14 years old. When he first came here a few months ago, he mostly sat around and looked sad. No wonder. He was abandoned by his mother when he was about 5. He went to an orphanage where they beat the kids. That orphanage was shut down and he ran away. If his family couldn’t take care of him and the orphanage couldn’t take care of him, he would find his own way. He lived on the streets for years. In and out of orphanages, rehab, jail, and back the streets. Recently, he was in a rehab center, and when he finished, he went to find his mom. Once again, she rejected him, and Children’s Services brought him here.

One of the first days he was here, I was working on updating the child sponsorship profiles, and needed a picture of him. It took about 20 tries and finally, a bribe of chocolate, to get this boy to smile. Even here, you can see, it was not a big smile. He also told someone he did not like Americans. 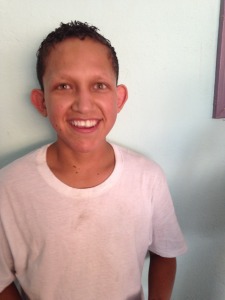 Well, I gave him his chocolate bar since he did finally smile. And every week since then, I have given him a chocolate bar or two. Just to let him know that some Americans do care! And I have watched this boy slowly start to change.

When I asked what was in the notebook, he showed me that it is full of songs he has written. And he asked me to help him translate the songs into English,so I have been helping with that. 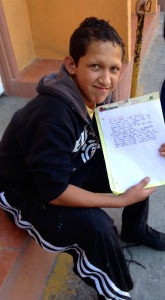 Meanwhile, the staff’s teaching on God’s love, and more importantly, their LIVING of God’s love, finally broke through the shell around his heart. Last weekend, he was baptized! 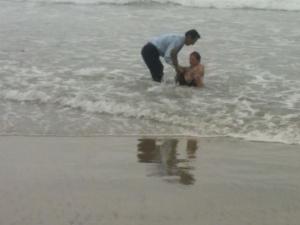 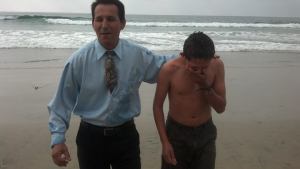 Jose told me that he feels a new peace now and he is much happier. And you can see it on his face!

He has a lot to overcome still in his life… but he has taken the step to do it with Jesus, and that is the most important step. Pray for him, that he will continue to grow and follow, and in doing so, that God will heal his past and give him a bright future!

TCM makes stories like this happen. I am thankful to have witnessed this. God is at work here at TCM. 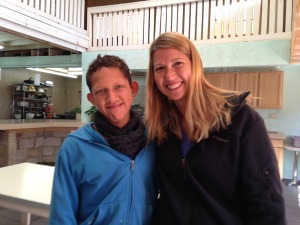